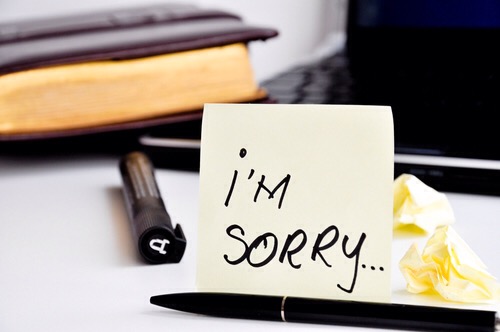 Today’s insight journey led me to the idea that understanding and accepting the fact that some apologies may never be received is liberating. I am not certain about you, but I have certainly had moments when I was wronged by people, be they loved ones, co-workers, employers, or even strangers, and I kept thinking to myself that at some point surely those individuals would realize that they mistreated me and that they would eventually apologize. In some of those cases the apologies did eventually come, yet in many of those situations the apologies just simply never materialized.

I spent months, even years in some cases, wondering when the apologies would come, not understanding why they had yet to materialize, causing myself to be consumed by anguish and despair. Eventually, after receiving some much needed advice, I began to think about what waiting for those apologies was doing to me. I realized that it was making me utterly miserable, and that experiencing all of that misery was not changing those situations, especially since the individuals from whom I expected the apologies were likely living their lives not even thinking about whatever had happened.

It was then that I realized that sometimes we just have to simply understand and accept the fact that some of those apologies that we are due may never come. We need to accept it and be okay with it, knowing that if we don’t make peace with it our peace will continue to hang in the balance. And that is just not worth it. #lovebythedrop