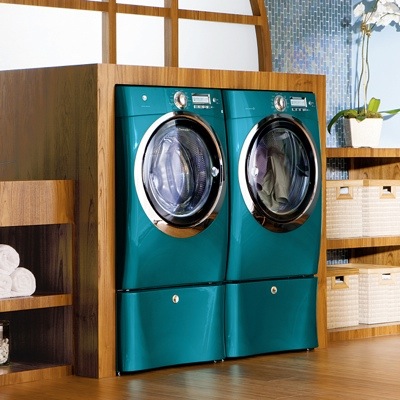 Today I am thankful for washing machines. Though they are pretty basic machines that are very common, we should make certain that their importance never becomes lost to us.

I do not know about you, but I often use my washing machine at the drop of a hat without giving it much thought. And my guess is that, more than likely, that is the case with most people, in that as long as our products and machines function the way that we expect and want them to, we give them little to no thought. Yet, when something out of the ordinary happens to our machines we become frantic while wondering what could have made them “act up” all of a sudden.

Tonight was one of those nights when I had a clothing emergency and needed to wash some clothing items right away in order to curtail the emergency situation as much as possible, as soon as possible. I practically sprinted to my washing machine, turned the machine on, tossed the clothing items into the water that was already being agitated by the washer, closed the lid after adding detergent and fabric softener, and then breathed a huge sigh of relief. And it was in that moment that I realized how thankful I was that I had a modern washing machine as opposed to one of the more antiquated versions that utilized a washing board, or even more challenging, simply some water and a rock. Imagine how long it would take to wash clothes that way. Just thinking about that made me want to give my washing machine a big hug, which I would have done if I could have successfully wrapped my arms around it. Hug or not, washing machines are definitely on my “thank you” list tonight. #lovebythedrop