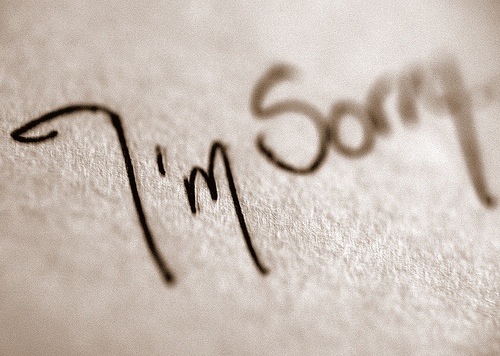 Today I am thankful for the realization that sometimes I apologize too much. This is one of those aspects that I did not realize until my mother brought it to my attention. Prior to her mentioning this to me I would apologize at just about any time, to just about anyone, whether it was because I had told them “no” regarding something, I had told them something that they did not want to hear, or I had proffered an opinion than differed from theirs. It seemed like no matter what it was, if it was a situation that felt somewhat uncomfortable or was a situation in which I had said or had done something that made me wonder if the other person took what I said and did the way that I wanted them to or hoped that they would, I somehow found myself apologizing. And I came to do it so frequently that it got to the point that I did not even think about it consciously and was not even aware of how much I was apologizing to people unnecessarily, though the apologies were always sincere.

So when my mother brought it to my attention that I was apologizing to people too much and in a way that was essentially over compensating and was causing me to take responsibility for things for which the responsibility truly did not rest with me, I initially defended my behavior by saying that it was not really that I apologized too much, but rather that I just did not want to risk offending anyone or causing anyone to come to the conclusion that I had mistreated them in anyway. And then my mother lovingly explained to me the difference between what I was actually doing and what I was actually wanting to accomplish. And it was then that I paused.

She was absolutely right. Over the years I had become so concerned about what other people thought, how they felt, how they took something that I said or did, and what their opinion of me was, that I had inadvertently placed myself and my needs on the back burner. And in doing so I had effectively silenced my voice, throwing things seriously off-balance. That truth hit me like a ton of bricks, a very timely and necessary ton of bricks I might add though.

My mother went on to tell me that I really needed to curtail that habit of apologizing unnecessarily, and that is what I have committed myself to working on. Since that day I have found that I have significantly reduced the amount of unnecessary apologizing that I do, though occasionally I do still have my moments when I apologize unnecessarily. However, every time that I contemplate apologizing to someone my mother’s words come to mind and I quickly analyze the situation in order to determine what my true reason for apologizing is and whether or not it is appropriate for that instance. And in doing so a substantial portion of my voice has returned to me, and for that I am truly thankful. #lovebythedrop