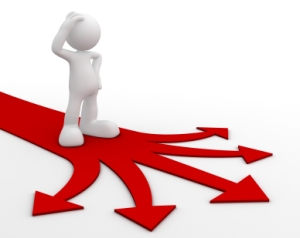 Today I am thankful for options. I am a woman who is more than capable of handling herself when boxed into a corner, but having options is certainly something that I appreciate. Having a choice of entrées for dinner, shoes for an outfit, and even greeting cards for a loved one’s birthday is a blessing to me. And what is even better than simply having options is having options that do not essentially require me to pick between the lesser of two evils, so to speak. As a person who has found herself in that position on multiple occasions, having to make a choice under those circumstances is not something that I would wish for anyone.

Options bring with them freedom, and the greater the quality of the options, the more substantial the freedom. There is just one small catch though. In order for the freedom that comes along with having options to manifest itself a person must be willing to make a choice and capable of making a choice between those options. And there lies the challenge when a person finds himself or herself in a state in which he or she either does not want to, does not feel capable of, or simply does not feel like choosing anything. And, for me, it has been in those moments, when I have seized the opportunity to choose between the options with which I was presented, whether desired or less so, despite not wanting to do so, that I have come to see myself anew. #lovebythedrop