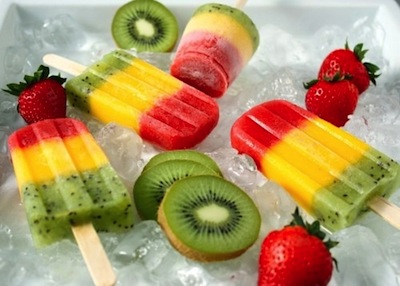 Today I am thankful for popsicles. As the heat swirls about us like a swarm of hungry and dangerous bees, we are reminded of the fact that the inevitable is near: the arrival of summer. Though where I am it already feels as though summer is here, summer will not officially begin for another few weeks or so.

Nevertheless, heat is heat. And one of the surefire ways to beat the heat that I have made use of for years now is to partake of the occasional popsicle. Popsicles are cool, tasty, fairly inexpensive (unless you are consuming a gourmet version of them, and in that case, who knows how much of a dent in your budget they might make), and best of all, portable. And if you want to be a little adventurous, you can even make your own, which allows you to control what actually does (and more importantly what does not) make it into the recipe.

Now, consuming popsicles won’t completely evict the heat, but it will surely make maneuvering through the heat more bearable. So, the next time that the mercury on the thermometer decides to dangerously spike, why not reach for a popsicle to cool things down a little bit? I warn you, though, once you allow popsicles to enter your life, they usually make it a point to stay for a while. Enjoy! #lovebythedrop